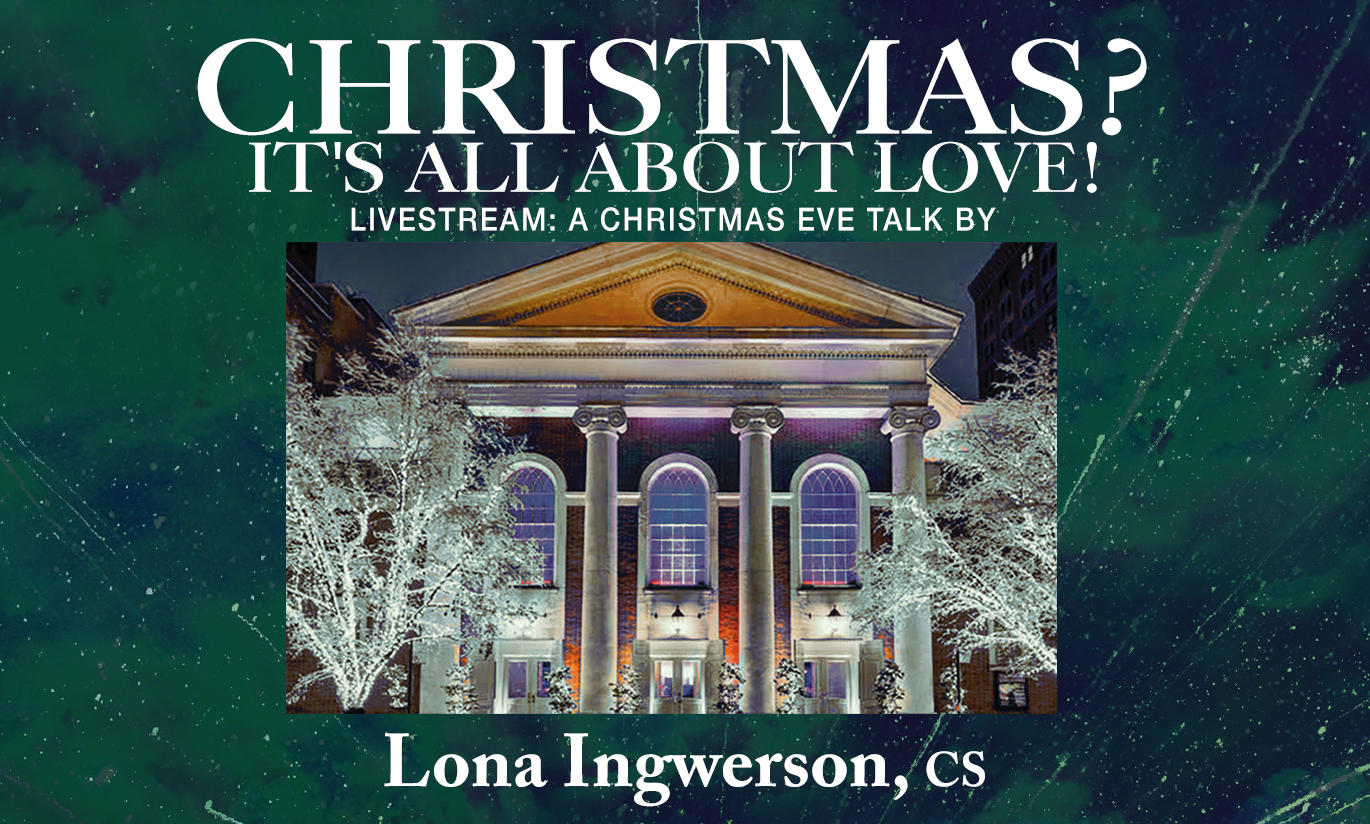 Christmas? It’s All About Love!

Where will you be on Christmas Eve? We hope you will be with us!

In a time of so much change, there are a few things that remain consistent… among them Christmas and love…

Each of these, Christmas and love, will be highlighted in a talk entitled “Christmas? It’s All About Love” to be given by Lona Ingwerson, C.S. on Christmas Eve at 7:30 pm Eastern time.

Although the talk is sponsored by Third Church of Christ, Scientist in New York City, this year it will come to you from Lona’s home in Laguna Beach, California… didn’t we say it’s a year of change?

You are invited to join us on online Christmas Eve, Thursday, December 24th, at thirdchurchnyc.com.

11 minute mini-concert, “Pianistic Delights for a Christmas Eve” provided by Watchfire Music while you log on and get settled for the talk!

The talk starts with the premiere of our title song, “It’s All About Love” –– written especially for Lona’s talk.

In English and Spanish

We will provide a live simultaneous Spanish translation for Spanish speakers.

This Christmas Eve event will be available to you after Christmas Eve to view, share and enjoy. We are excited to be able to keep it ready for viewing any time 24/7 after the event.

Lona is a life-long Christian Scientist, and a former member of the Board of Lectureship.

Prior to entering the public practice of Christian Science, she was an actress, having appeared in motion pictures, on stage, in radio, and on television. She had her own radio and television
shows and has a master’s degree in Dramatic Arts.

Peter Link performed, composed the music and co-wrote the lyrics to It’s All About Love with Dora Redman especially for Lona Ingwerson’s talk. Angel voices added by Julia Wade and Jenny Burton.

It’s the tale of Joseph and the Innkeeper, Mary and the Babe, the Shepherd Boys, the Three Wise Men and a host of Angels. It’s a song that once you hear, you’ll never forget, and It’s All About Love!

What better way to close the evening than with a duet from Julia Wade and Peter Link.

Here we imagine the morning after the birth. Mary and the baby are sound asleep recovering from the effort, but the party goes on. And it never stopped. It’s called “Quite a Time”.