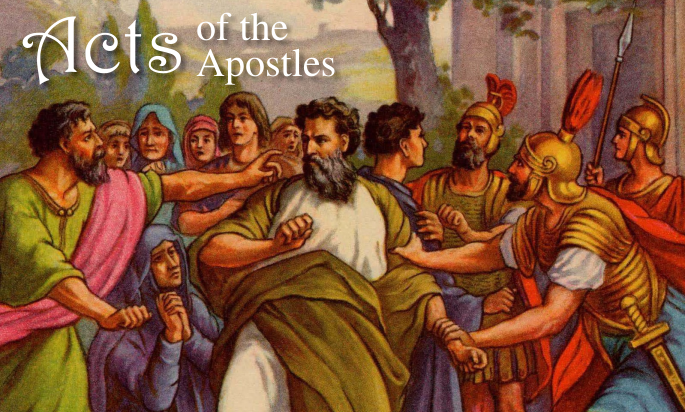 Not in New York?  Join us on Google Hangouts, or via conference phone, on Sunday, December 20th, at 1:00pm EST.  Remote Attendance Instructions

All are welcome to join our Group Bible Study as we continue our deep dive into Acts of the Apostles.  This Sunday, December 20th at 1:00pm, we will be reading and discussing chapter 22.

Sometimes in life we encounter resistance to doing what we know is our life’s purpose. Chapter 22 in Acts shows how Paul faced such a conflict head on, unafraid of the consequences, and lived out his purpose of enlightening the early Christian Church.  Soon after Paul arrived in Jerusalem, a group of Jews rounded up a mob to try and kill him.  These men had heard false rumors that Paul was teaching people to disobey the Jewish laws, and also wrongly accused him of bringing Gentiles into the Jewish temple.  Fortunately the local Roman authorities stepped in and arrested Paul before he could be killed.  Once in prison, Paul wanted to address the crowd who had accused him and try to explain himself.

Chapter 22 starts with this address to the Jewish believers in Jerusalem.  Paul recounts his tale of how he went from Christian persecutor to disciple of Christ.  The crowd listens intently and doesn’t take issue with a word Paul says until he asserts that God had sent him to the Gentiles.  This one statement caused such an uproar that the Roman commander brought Paul back inside and ordered him whipped until he confessed his crime.  Luckily Paul was quick on his feet and declared his Roman citizenship, a fact which prevented him from being punished without a trial.

Saying the words “the Lord said to me, ‘Go, for I will send you far away to the Gentiles!’” was no small feat.  Paul knew this was the reason the people were trying to kill him, and he said it anyway.  Why?  Because this message was from God.  Paul knew how important it is that Christianity is not for a select group of people, it’s for the whole world.  It was his Divine commission to make this known, and he trusted that God would support him in this.

We can have the courage and strength to live out our purpose in life just like Paul did by relying on God and following in the way of Christ Jesus.  Join us this Sunday as we learn from these powerful examples in Acts.  If you’re not in the New York area and would like to join on the phone or online, read below for instructions:

To join our Bible Study Google hangout, make sure you have a Google+ account, and add Third Church to one of your Google+ circles.  Once you have done this, send your name, email, and Google+ account to ThirdChurchOffice@juno.com with the subject line “Bible Study Hangout″ and we’ll send you further instructions on how to join.  If you have any issues getting set up, we’re here to help!  Call us at (212) 838-1870 or email ThirdChurchOffice@juno.com.

To join Bible Study on the conference phone, use the dial in number and access code below: